Following Russia’s recent annexation of Crimea and invasion in the eastern region of Ukraine, US ambassador to UN Samantha Power told a meeting that “it is clear Mr. Putin has a plan.” What are President Trump’s choices? 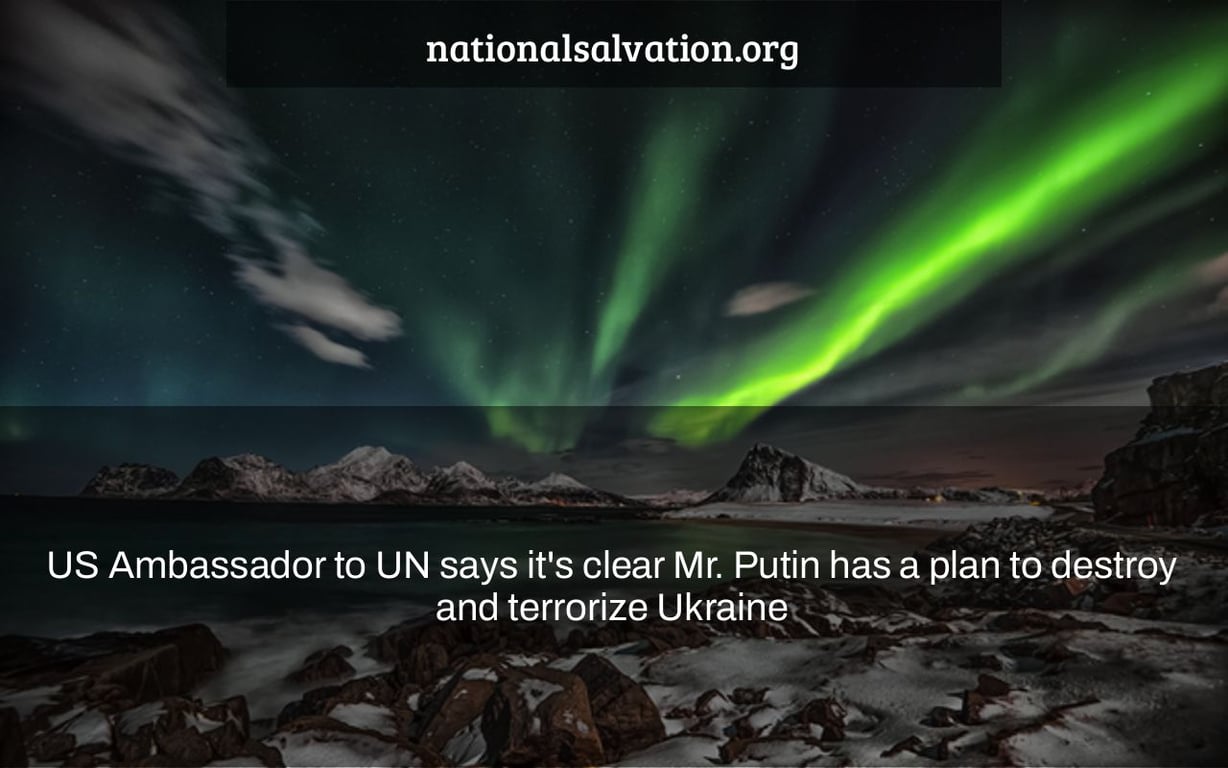 “It’s apparent Mr. Putin has a strategy to destroy and terrify Ukraine,” US Ambassador to the United Nations Linda Thomas-Greenfield said, adding that the US is “concerned that the world has to be prepared for a very long and very tough road ahead.”

“If the previous two weeks have taught us anything, it is that the Ukrainian people will not surrender.” “Many Russians, including many Russian troops, do not want this conflict,” Thomas-Greenfield remarked during a United Nations Security Council meeting.

“Putin is plainly ready to risk the lives of thousands of Russian troops to pursue his personal aims,” Thomas-Greenfield remarked.

“We’ve been telling Moscow for weeks that, in the end, unleashing this conflict would make Russia weaker, not stronger.” “It’s already proven to be true,” she said. “The issue is how much destruction President Putin is ready to inflict in exchange for this massive blunder.”

In her remarks, Thomas-Greenfield stated that the United States is “outraged by increased reports of Moscow’s attacks harming Ukrainian civilians in its unprovoked and unjustified war against the Ukrainian people,” and expressed growing concern “about the protection of civilians in this conflict, particularly women and girls who are vulnerable to gender-based violence, LGBTQI Ukrainians, as well as Ukraine’s population of older adults and people with disabilities.”

She said that her Polish colleague informed her that 100 migrants were pouring into Poland every minute.

“All vulnerable children, especially separated and unaccompanied children and those in institutional care, must be protected and cared for,” Thomas-Greenfield said, adding, “Children should never, ever be engaged in conflict – period.”

“Children should never be a part of a battle.” “They must be safeguarded,” she said again.

“We already know that scores of children have been died in Putin’s conflict, as UNICEF has revealed. And, as we seek to corroborate instances, we know that the true numbers are far higher,” she added. “The violence and damage have also gravely scarred young children.” They’ve seen so much that they’ve lost their ability to communicate. This war’s physical and psychological scars will endure a lifetime.”

“Hospitals are running out of supplies, food is running out, and civilian deaths are rising, all while the most vulnerable populations – disabled people, the elderly, and children – continue to face the brunt of the suffering.” From Leningrad to Aleppo, we’ve witnessed besiegement before. “These are colossal catastrophes,” she said.

“In particular, we demand that the Russian Federation accept and fulfill in good faith Ukrainian recommendations for time-limited humanitarian safe passage in specified, agreed-upon places.” “We demand the development of a ground-level notification system that will allow humanitarian convoys and planes to go safely,” Thomas-Greenfield added.

She also urged “Russia to alter direction, remove its soldiers, and deescalate via dialogue,” adding that the US backs “Ukraine’s ceasefire request.”

“In the meanwhile, we thank those who are doing all they can to ease the agony Putin has inflicted on the people of Ukraine,” she stated.

“We are closely collaborating with the Government of Ukraine, neighboring countries, and international organizations, including those within the UN system, to monitor the situation and will work with them to address humanitarian needs both in Ukraine and in the area,” she said.

“Whatever direction Russia’s invasion takes, we must do everything – and I emphasize everything – we can to assist the Ukrainian people,” Thomas-Greenfield added.

“Kyiv is still standing, and we are standing with Kyiv,” she said. “We are united in our support for Ukrainians.”

Is it worth investing in Nikola Jokic rookie cards post

Shane Warne obituary: A fascinating life on and off the cricket field