The European Central Bank (ECB) is facing a serious problem: low inflation. Economists are debating whether the ECB should increase its balance sheet, potentially leading to more inflation. However, at this point in time, economists agree that it’s not about boosting demand from spending or investment but rather curbing supply of money and credit growth by tightening monetary policy so as to keep prices down. It’s an issue with both demand and supply sides that has been exacerbated by changes in regulation since the 2008 financial crisis., 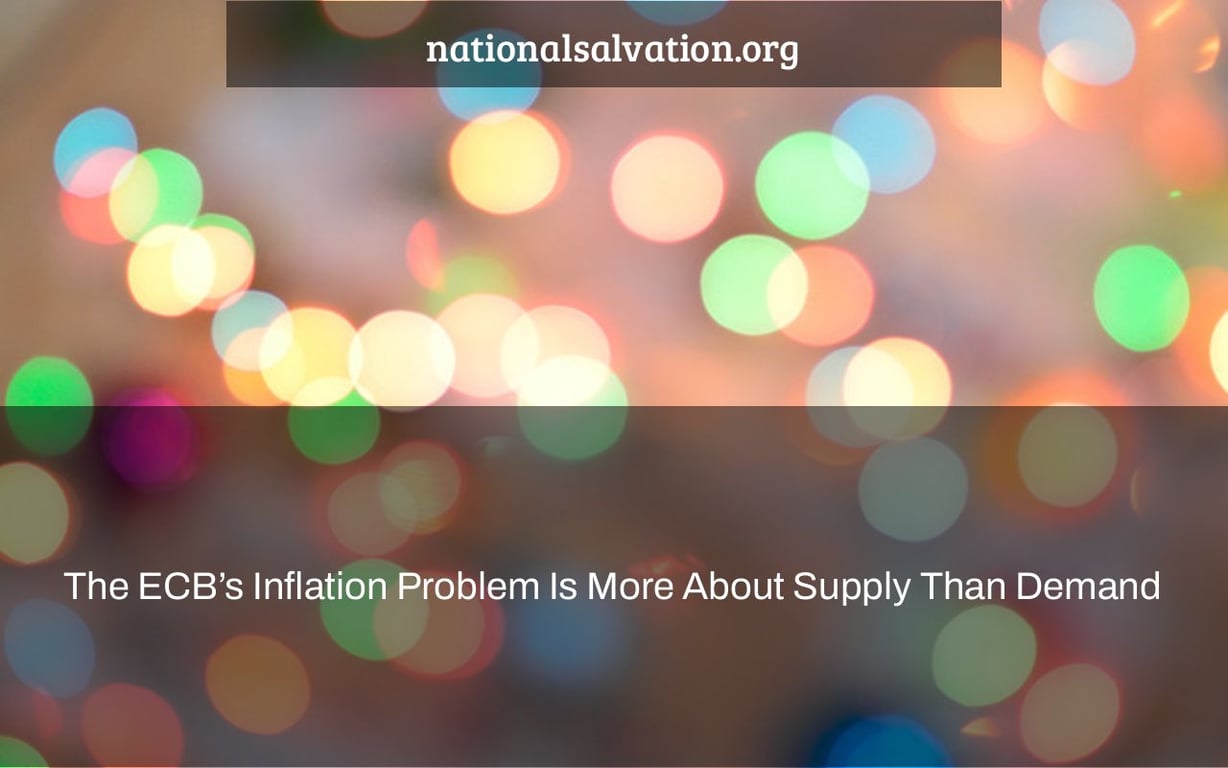 Both the US and European central banks are dealing with inflation issues, but their causes are different, which may force the Americans to hike interest rates more aggressively and to a greater level than their continental counterparts.

Much might change in the next days or weeks if the battle in Ukraine has an unanticipated impact on markets and the global economy. However, as of last week, US Federal Reserve officials signaled that a series of rate hikes will begin this month to combat excessive inflation.

Before Russia’s invasion of Ukraine, European Central Bank officials hinted that they might set a deadline for stopping their bond purchases, paving the way for their first rate hike since July 2011. Since the invasion, it’s been unclear if they’ll do so during their meeting this week, or whether they’ll wait for further information on the conflict’s path.

According to experts, if and when the ECB begins to withdraw its stimulus measures, it will not necessarily tighten policy as much as the Fed since European inflation is mostly caused by supply disruptions, notably in the energy sector. Inflation in the United States is likewise a result of supply issues, but it seems to be fueled by robust demand for goods and services.

The origins of inflation are significant because, although central banks may reduce demand by increasing interest rates, they have limited means to increase supply.

“In the United States, demand is considerably more essential,” said Alfred Kammer, director of the International Monetary Fund’s European section. The majority of European inflation is “driven by the energy side, which monetary policy can’t do anything about anyhow,” he added.

According to experts, Russia’s invasion of Ukraine would exacerbate the divide between the United States and Europe. By worsening supply issues, the conflict is expected to generate greater inflation in both economies, but it will likely weaken demand in Europe considerably more than in the United States.

Economists believe that a large portion of the 2021 inflation spike was due to a worldwide rise in spending on products, along with severe supply shortages and bottlenecks, as firms restarted operations that had been paused or reduced when the epidemic broke out in 2020.

However, the United States accounted for the majority of the increase in demand last year, with significant European countries accounting for just a small portion. In the three months through September 2021, adjusted for inflation, U.S. consumer expenditure on products was more than 12% higher than pre-pandemic levels, according to a new research by the International Monetary Fund. Consumption of products in Germany, on the other hand, was down, while it was almost the same in France and just marginally higher in Italy.

The larger scale of government actions to assist the economy during the epidemic explains some of the relative strength in consumer spending in the United States. Through June 2021, the IMF predicts that increases in US government expenditure and lost tax collections reached $5.3 trillion, or almost a fourth of yearly GDP. Equivalent measures in Germany amounted to 13.6 percent of yearly production, whereas responses in France, Italy, and Spain were lower.

Prices of secondhand automobiles have risen higher in the United States than in the eurozone, as an example of this disparity.

According to IMF estimates, vehicle manufacturing in the United States has declined far less than in Europe, owing to a lack of components such as microchips in both regions. In the United States, output in September 2021 was down 13% from the pre-pandemic September 2019 level. German output, on the other hand, was down by a third. However, in the United States, where customers have more money because to larger government stimulus programs, used vehicle and truck prices were 40.5 percent higher in January than a year ago, while they were only 7% higher in the eurozone.

Last spring, Fed policymakers ascribed the spike in inflation to rises in the pricing of a few products associated with the reopening of the economy, which they expected to be temporary. Price pressures widened instead, and the labor market tightened.

At the Fed’s next meeting, Chairman Jerome Powell indicated he will suggest a quarter-percentage-point rate hike. Powell also said that the impact of Russia’s invasion of Ukraine on the US economy in the short term is “very unpredictable.” Rod Lamkey/Zuma Press photo

The ECB has little power to influence energy prices, but it is mindful that increased energy costs will be a larger drag on economic growth in the eurozone than in the United States. Some experts now believe that if energy costs continue to climb or Russia’s natural gas supply is cut, the eurozone will face a recession later this year. Unlike the United States, which saw economic activity return to pre-pandemic levels in mid-2021, the eurozone has yet to completely recover and may be delayed in passing that barrier by the invasion’s aftermath.

Many analysts believe the ECB will increase rates far less than the Fed due to a weaker European economy and lower inflation powered by robust demand.

ECB policymakers kept their bond-buying program open-ended at their meeting in early February, but indicated they were leaning toward ending it shortly. Economists are skeptical that the authorities would do so when they meet on Wednesday and Thursday, given the considerable uncertainty about Europe’s economic future after the invasion.

Policymakers at the European Central Bank have said that they anticipate bond purchases to finish “shortly before” they begin hiking its main deposit rate.

Some analysts anticipated the ECB to increase rates as soon as September before the invasion, but many now expect the first move to be next year, if at all. The Fed might have raised rates multiple times by then.

Paul Hannon can be reached at [email protected]