In 1948, General of the Army Douglas MacArthur returned to Norfolk, Virginia as a hero. Thousands came out on the streets to see him and he was given an ovation by all those in attendance. He then proceeded to deliver one of his most memorable speeches calling for unity among not only Americans but also people from other countries who had been alienated after World War II.

General MacArthur was the supreme commander of allied forces during World War II. His legacy is still present in Norfolk, Virginia. 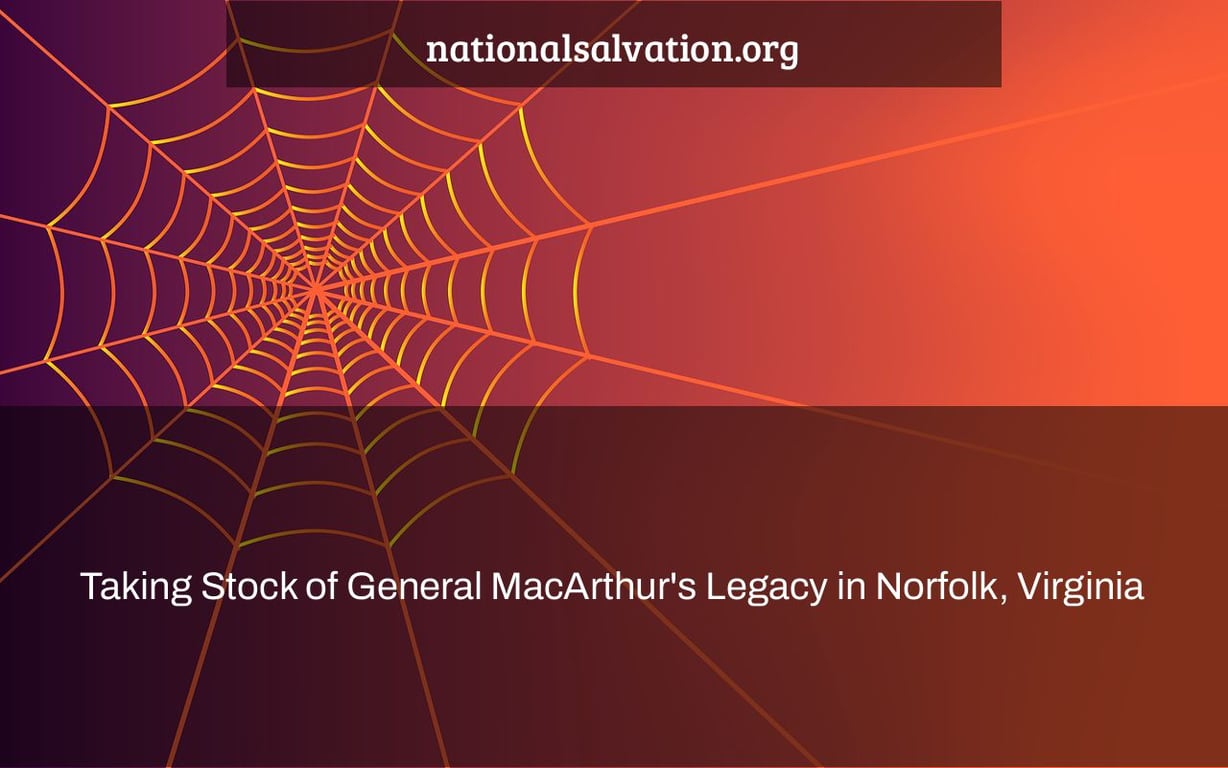 Douglas MacArthur traveled the globe, but his roots in the Chesapeake drew him back.

Douglas MacArthur was a hero to me when I was a kid. At the conclusion of WWII, he had freed my mother, Leanne Blinzler Noe (along with her sister Ginny, father Lee, and hundreds of other Allied citizens) from the Santo Tomas Internment Camp in Manila. In 1957, my mother sent the general a letter of appreciation, to which he replied quickly but genuinely on his official letterhead—and which she has given me.

On a recent visit to the MacArthur Memorial in Norfolk, Virginia, I mentioned the letter to James Zobel, the head archivist. “Wait a minute,” he says, furiously tapping his keyboard. He rushes into a massive vault filled with millions of MacArthur-related papers and takes one out. My pulse quickens as he raises a stack of papers, and there, on top, I see my mother’s schoolgirl-perfect handwriting.

“Being such a humble guy, you undoubtedly shy away from praise,” she had written on July 12, 1957, “but you definitely deserve the highest for your honesty, far-sightedness, and acute sense of judgment.” “I was one of the captives in Santo Tomas, Manila, who saw you when you and the First Cavalry arrived in February 1945,” she went on to explain. Looking back, it was a razor-thin margin, yet we never lost confidence in your promise, ‘I Shall Return.’”

It’s no secret that General Douglas MacArthur is a divisive figure: a brilliant tactician lauded for his role in winning World War II and overseeing the successful Allied occupation of postwar Japan, but also a man who could be vain, arrogant, suspicious, and insubordinate, to the point of being fired by President Harry S. Truman in the middle of the Korean War for publicly disagreeing with him. I was wondering whether the city where he is buried, as I would assume, shared my family’s reverence—hence my visit today.

“Not necessarily,” adds Zobel. We’re seated in the memorial’s public library, which is surrounded by MacArthur’s 5,000 volumes. “We’re trying to figure out what’s going on. That’s exactly what he wanted. He’s always been controversial, but that’s something we welcome since every story has two sides.”

MacArthur lived all around the globe, but never in Norfolk, it seems to me. Why is he stuck here indefinitely? “This facility exists because of his mother,” Zobel explains.

Mary Pinkney Hardy MacArthur grew up at Riveredge, a 20-room brick house across the Elizabeth River in Norfolk’s Berkley district. Two of her brothers refused to attend since they had fought for Robert E. Lee’s Confederates, so she married Arthur MacArthur, an army captain and Medal of Honor hero for the Union in the Civil War, on May 19, 1875.

Arthur III and Malcolm MacArthur were the MacArthurs’ two children in Norfolk, the latter of whom died at the age of four and is buried at Norfolk’s Cedar Grove Cemetery. Douglas was scheduled to be born in Norfolk as well, but on January 26, 1880, his mother gave birth at Little Rock Barracks, Arkansas, where her husband was stationed.

Riveredge is no longer there, but a tiny, unassuming memorial garden with walls built from the old house’s bricks and tall trees that might well date back to Mary’s time remains. Douglas MacArthur said in 1951, when he came to Norfolk to dedicate the park to his mother, that he felt Norfolk was his spiritual home. In 1960, town authorities rekindled that feeling by offering MacArthur an archive including all of his possessions, as well as his ultimate resting site.

They chose the magnificent old City Hall, constructed in 1850, as a potential site for the monument, and MacArthur replied, “‘Yeah, it looks very nice,’” according to Zobel. The city collaborated with MacArthur on the interior design, which included a circular subterranean crypt and two marble sarcophagi (one for him and the other for his wife, Jean), but he never saw the final product. On April 5, 1964, he died, almost 13 years after Truman dismissed him and only days before the scheduled Memorial Day dedication. 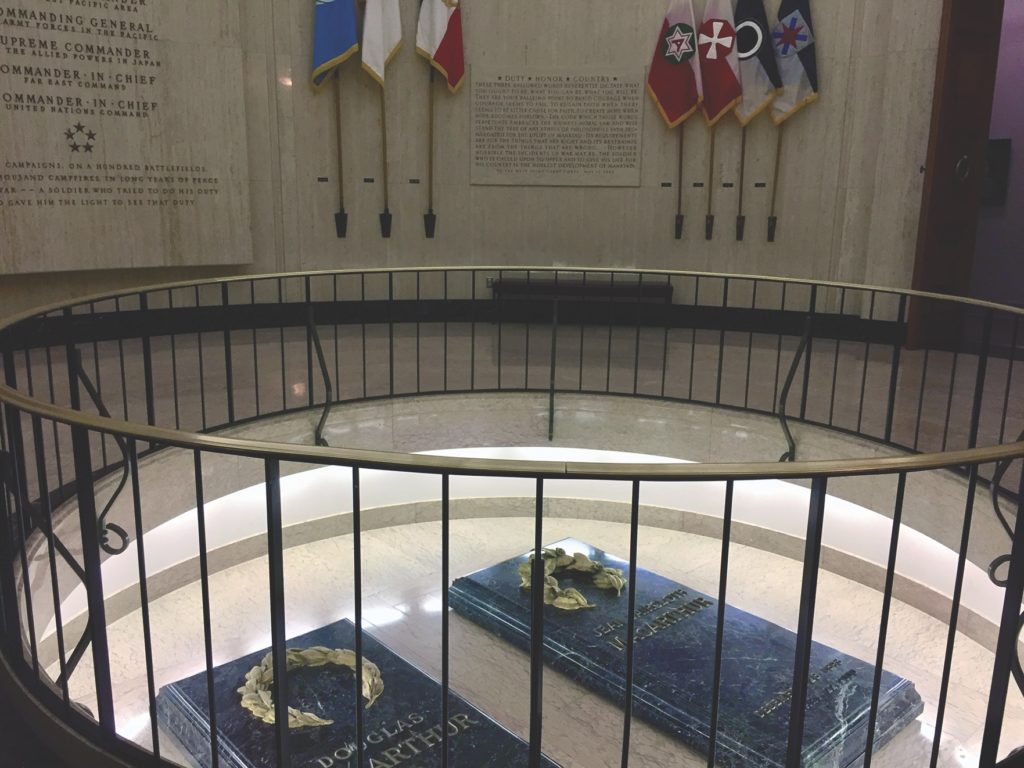 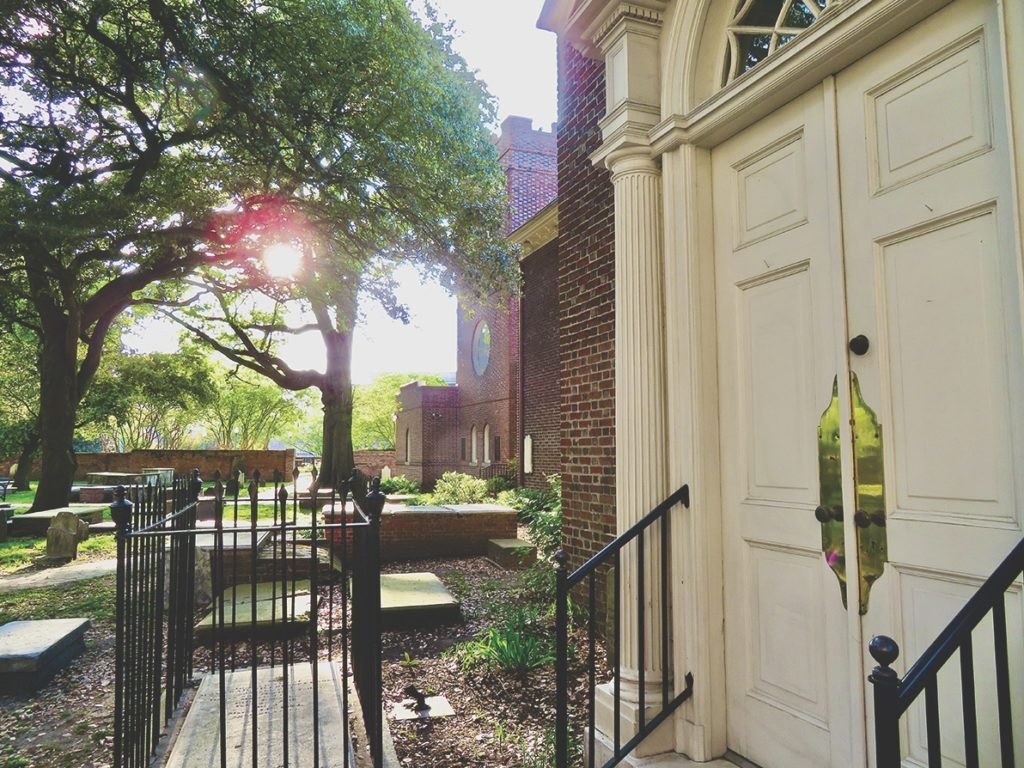 On April 11, he was laid to rest in St. Paul’s, a historic brick church two blocks away. When I go there, I notice the weathered tombstones strewn around the grounds, and my eyes widen when I read the dates, some of which date back to the 1700s. I see a tiny sign with the words “Cannonball” and an arrow. A short, bush-lined walk leads to a side wall of the church, where a cannonball, fired from Loyalist Lord Dunmore’s fleet during the 1776 assault on the city, lies lodged high up. I picture the majestic, tree-shaded location teeming with MacArthur’s funeral guests, including prime ministers, diplomats, governors, and what army authorities termed the largest gathering of military personnel in the twentieth century. As the general made his last trip to the monument via caisson, a procession lined the streets.

Today, MacArthur rests alongside Jean, who died in 2000, under the memorial’s magnificent rotunda (his mother is in Arlington National Cemetery, next to his father). The general’s lengthy list of accomplishments—from 1903 West Point graduate to commander in chief, United Nations Command—are displayed on the walls, along with inscriptions and flags from his military career. In the adjacent renovated corridors, the memorial’s museum component awaits, a chronological march through MacArthur’s life in nine rooms displaying valuable military and personal items in the perspective of 20th-century history.

As we go through the exhibits, Zobel points out interesting items such before a chest of silverware from MacArthur’s Manila Hotel room; his gun, discovered on Corregidor years after his Philippine escape; and General Hideki Tojo’s sword, stolen just as he attempted suicide. The general’s signature headgear, corncob pipe, and Ray-Ban sunglasses are also on display. 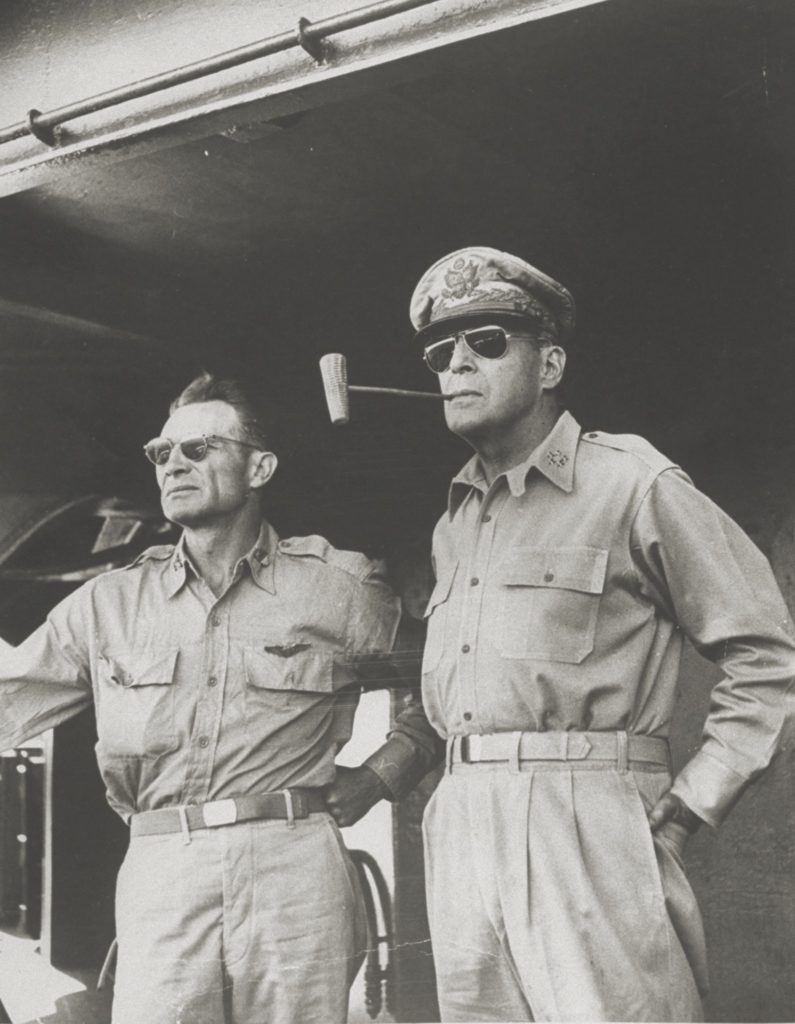 The exhibits don’t hold back on their portrayal of a complicated guy, as Zobel said when we first met. He shows me, for example, MacArthur’s last assessment report of Dwight D. Eisenhower, who was MacArthur’s chief of staff when he left in 1937. “He puts on here, ‘the most intelligent officer,’” Zobel observes. They don’t get along personally, but he doesn’t let it stop him from pursuing his dreams. That is the contrast.”

At the monument, though, there are more personal tales to be discovered. His love letters, for example—but not to his wife. “In Manila, all of his materials are destroyed,” Zobel adds. “The only thing that keeps coming up is the letters he sent to all of these females throughout the course of his life. One is a 28-page rhyming couplet poem to this girl in which I say, “I’m going to die in this monster fight, and you’re going to grieve me for the rest of your life.”

He moves his finger to another image in the “World War II” collection. He replies, “This one is extremely revealing.” “These are the first three presidents of the Philippines: Emilio Aguinaldo, Manuel Quezon, and José Laurel. These were his closest companions. He was not a colonial who socialized with white people. Quezon was the godfather of his son. That is the bomb in Spanish culture.”

MacArthur has been deceased for 57 years, and the World War II and Korean War generations have reached retirement age or have passed away. I inquire of Zobel about MacArthur’s current relevance.

As we examine a map of the South China Sea in the exhibit depicting the Cold War’s origins, Zobel remarks, “The whole position in the Pacific remains the same as it was when Truman dismissed him.” “If you don’t deal with this now, you’ll have everything two generations from now,” MacArthur warned. And that’s the problem with MacArthur. Everything he prophesied [about Asia’s significance to America’s future] has come to pass, including China’s aggressive drive for dominance, the strong US-Japanese relationship, and a fractious Korean Peninsula.

Members of the Joint Forces Staff College, National Defense University, and Joint Advanced Warfighting School, according to Zobel, have all visited the memorial’s research center to examine MacArthur’s deeds and Cold War history in light of contemporary developments in the Asia-Pacific area. “MacArthur isn’t this guy who has passed away,” Zobel explains. “He is still relevant.” The MacArthur Memorial, with its archives and research center, is at the heart of it all.

I’m looking forward to returning with my mother in May 2022 for a POW reunion of those imprisoned in the Philippines during World War II as I drive out of Norfolk, past towering military ships reflecting off the harbor’s calm waters. I can’t wait to show her the letter she sent to her hero all those years ago, which has become part of MacArthur’s legacy in Norfolk.

MacArthur Square in Norfolk is home to the MacArthur Memorial. Hours of operation may be seen on the webpage. St. Paul’s Episcopal Church, located at 201 St. Paul’s Boulevard, is just two streets away. In Berkley, the Mary Pinkney Hardy MacArthur Memorial is located on South Main Street.

WHAT TO DO AND WHERE TO EAT

Two blocks from the monument, the Glass Light Hotel and Gallery is housed in a reinvented old structure (1912) that houses outstanding pieces of glass art. The Sheraton Norfolk Waterside Hotel, another Marriott choice, offers views of the Elizabeth River and Berkley.

For Chesapeake seafood, Waterside and Saltine are the places to go. The wonderful she-crab soup is served at the Freemason Abbey Restaurant, which is housed in an 1873 church.

WHAT ELSE IS THERE TO SEE AND DO?

In the heart of Norfolk’s core business area, the Waterside District offers a beautiful riverfront for walking and eating. The Battleship USS Wisconsin, which served in the Pacific during WWII and is available for visitors, is located just offshore.

Take a two-hour guided harbor tour around Naval Station Norfolk, taking in the sights and sounds of one of the world’s busiest seaports and the home of America’s Atlantic Fleet.