Explorers of Thedas gather in the Temple of Apollon to sacrifice a goat, during which they hear an ominous voice from within. 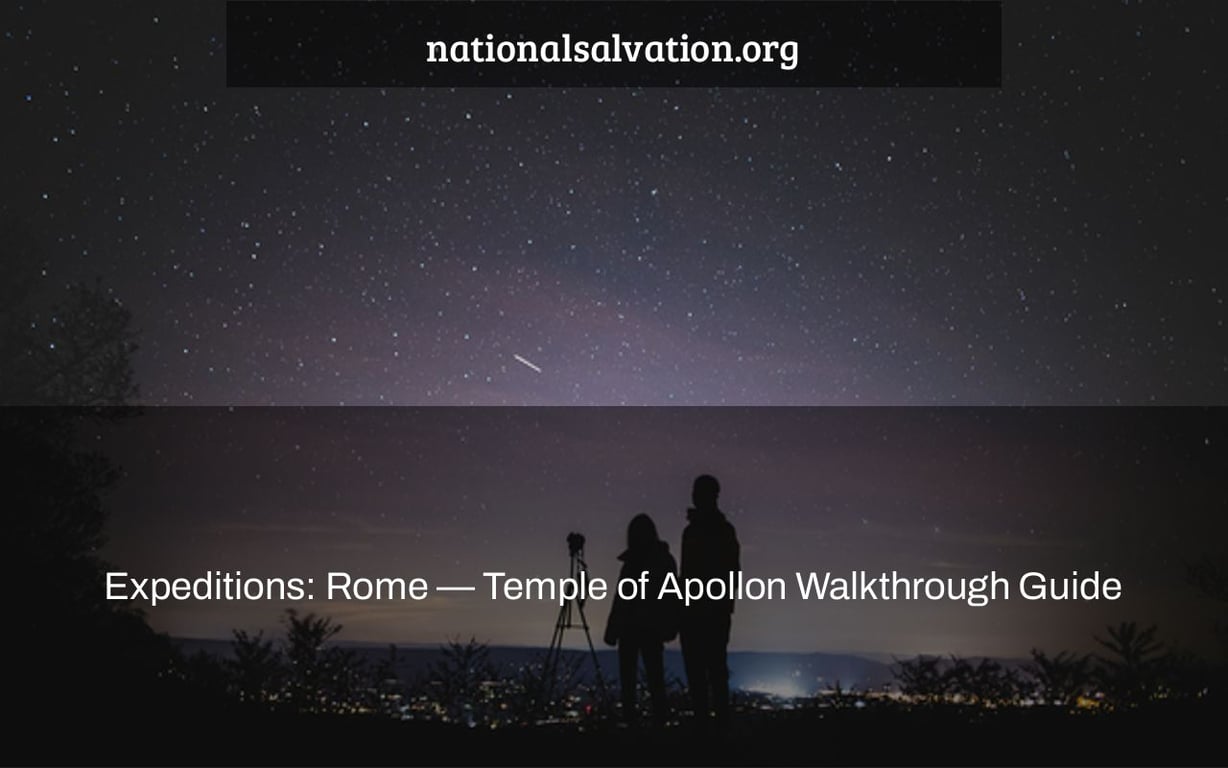 The Temple of Apollon is one of the areas that you can visit in the region of Mysia in Expeditions: Rome. There are sidequests and secrets to find in this location, as well as a main quest that’s required to progress further into the campaign.

Before we focus on the Divide and Conquer main quest in this Expeditions: Rome location, let’s talk about the other things that you can find in the Temple of Apollon. There are several unique items and other sidequests in this location.

*Make sure you grab the Sickle Blade material from a chest in the Pacification: Beach Village encounter.*

In the first area of the Temple of Apollon, you can talk to a merchant named Boethus. He sells weighted blades and javelin heads for crafting purposes. Likewise, you can ask about the Sickle Blade that you picked up earlier. He’ll hand over the Harpe blueprint. This is a unique sword that lets attacks of opportunity trigger twice.

From that spot, move to the western side and follow the stone steps. You’ll come across a lone man named Pigres, and he’s got a problem with Syneros. We discuss your interactions further and how to solve later riddles from this quest in our Olympian sidequest guide.

Past that point, there are garden decorations on the wall with a chest that contains the Caltrops schematic.

Further to the northwest is an area with a burning temple. Talk to the priest to start the Temple Fire sidequest.

The objective here is to collect water from the container, then throw the water jug to put out the fires. The water will affect the initial hex and all adjacent ones, so try to maximize the coverage. After your characters have thrown what they’re carrying, collect water once more until the sidequest is done.

The priest will give you the Schematic: Water Jug so you can craft that tactical item. It’ll be useful in battles where enemies like to use fires in an AoE, as you’ll find out shortly. Moreover, you’ll obtain the “Abundans Cautela Non Nocet” achievement.

Eurytos’ Bow is a one-of-a-kind item.

A ladder should be visible just before the flaming temple. A pickaxe is just next to it. Bring this all the way to the northeast edge of the region, where there’s a big temple and a damaged portion of the floor.

Use the pickaxe to create an opening. Climb down below, and grab the Eurytos’ Bow unique weapon. This is an amazing item for the Sagittarius class’ Marksman tree. It allows your archers to continue shooting hostiles if Interrupt is active as long as they get a kill.

How to Complete Divide & Conquer: Dealing With Theophilus and Zenobia

After you’ve completed everything, go to the Temple of Apollon’s northern part in Expeditions: Rome to see Theophilus. This settlement’s chief has no intention of aligning with the Romans.

Head back to the exit, but, before you get there, a woman named Zenobia will talk to you. It seems that her slain husband was the rightful ruler of the Temple of Apollon, and she wants to get revenge.

The next step in the Divide and Conquer quest in Expeditions: Rome allows you to choose from three options on how to deal with Theophilus:

We’re not sure about a handful of these stages, unfortunately. We do know that certain NPCs have a habit of gossiping in the background. However, after speaking with Zenobia, we didn’t detect any new triggers or reactions from NPCs.

We had no choice but to keep an eye on two ladies speaking north of Zenobia’s location. They were the only two people that stood out.

Eratha, one of them, confesses to being Theophilus’ lover. You may stroll beside her as she makes her way to a private spot with a statue. There will be conversation choices for you to choose from.

If you chose the Pathos rhetorical style at the start of the game, you might be able to convince her. Sadly, because we chose to go a different route, we decided to kill her in cold blood. She did drop Eratha’s Medallion, a unique talisman that replenishes maximum HP.

Return to Theophilus with Eratha’s Medallion as evidence of your good act. He’ll erupt in wrath, resulting to a battle with the help of other guards.

At the start of combat, Theophilus will throw Greek Fire where your characters are standing. This is extremely deadly as fire can spread easily, and your characters will suffer from the burning and burned status effects.

If you returned to Mysia just to create a Water Jug, you now have a useful tactical tool. Even so, you may depend on your wits and a little luck to get by.

After you’ve vanquished Theophilos, speak with Zenobia about the next phase in the Divide and Conquer quest in Expeditions: Rome.

You’ll leave the Temple of Apollon to go to the Pontus Scout Camp that’s southeast of Mysia. There will be a tough fight against dozens of soldiers and, in the end, you’ll find soldier uniforms that can be used as disguises.

Both the main character and Julia will then head inside Mithradates’ camp in Kyzikos. This will also be the first time where a romance prompt for Julia appears if you’re playing as a male character.

The objective is to search Mithradates’ tent for a contract. However, you may also open a chest that has Schematic: Mithradate. When you’re done here, return to the Temple of Apollon and talk to Zenobia. This will complete the Divide and Conquer quest in Expeditions: Rome.